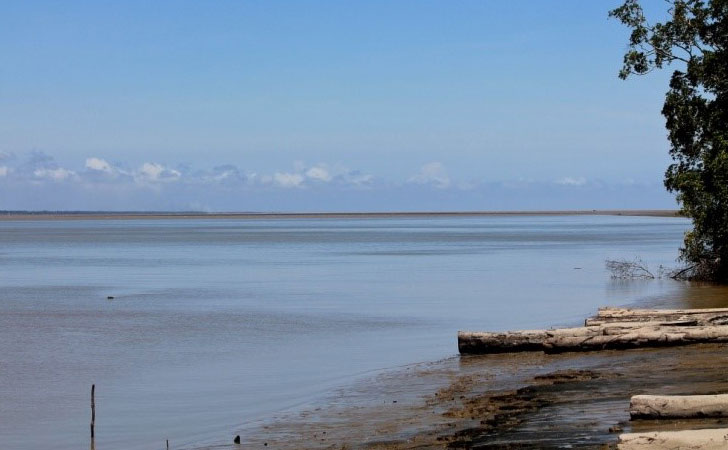 CSA Ocean Sciences Inc. was contracted to conduct sound measurements of airgun output as part of an Environmental Management Plan (EMP) for the protection of wildlife resources in five rivers of Suriname. Sound pressure level (SPL) recordings measured in dB re μPa were collected in the Corantijn, Coppename, Saramacca, Suriname, and Commewijne Rivers. The recordings were collected during a seismic data acquisition survey. The two dimensional (2D) survey was conducted using two 20-in.3 airguns towed at 0.67 m below the surface. The target frequency was set for 120 Hz, with a peak intensity of 170 bar.

SPL recordings were collected at three locations on each river. Each location represented unique physical and environmental characteristics, and each was selected to represent the overall characteristics of the river area being surveyed. Measurements were made using two calibrated CR-1 hydrophones connected to a ST191 dynamic signal acquisition system deployed from a separate support vessel. During the seismic survey, SPL measurements were acquired as the source vessel approached and retreated from the sample location. Recordings were acquired continuously, and the measurements were reported in 500 m increments over a distance of 0 to 2,000 m. An additional recording was collected at each sample location prior to seismic survey activity in order to establish an ambient SPL baseline. Measurements of salinity, temperature, and depth were recorded to determine underwater speed of sound and the physical characteristics at each sample location. Hydrophones were placed at a depth equal to that of the seismic sound source and at a depth equivalent to two-thirds the remaining water column below the seismic sound source at each sample location.

The results of the SPL recordings as they relate to the EMP show that the sound pressure level at 500 m was 174 to 178 dB re 1μPa across all sample locations in all cases; the sound source produced sound pressure levels less than the critical 180 dB re 1μPa at 500 m. The 180dB level is a value derived from the existing National Marine Fisheries Service (NMFS) noise exposure criteria; however, that level does not reflect ongoing noise exposure criteria discussions within the scientific community.