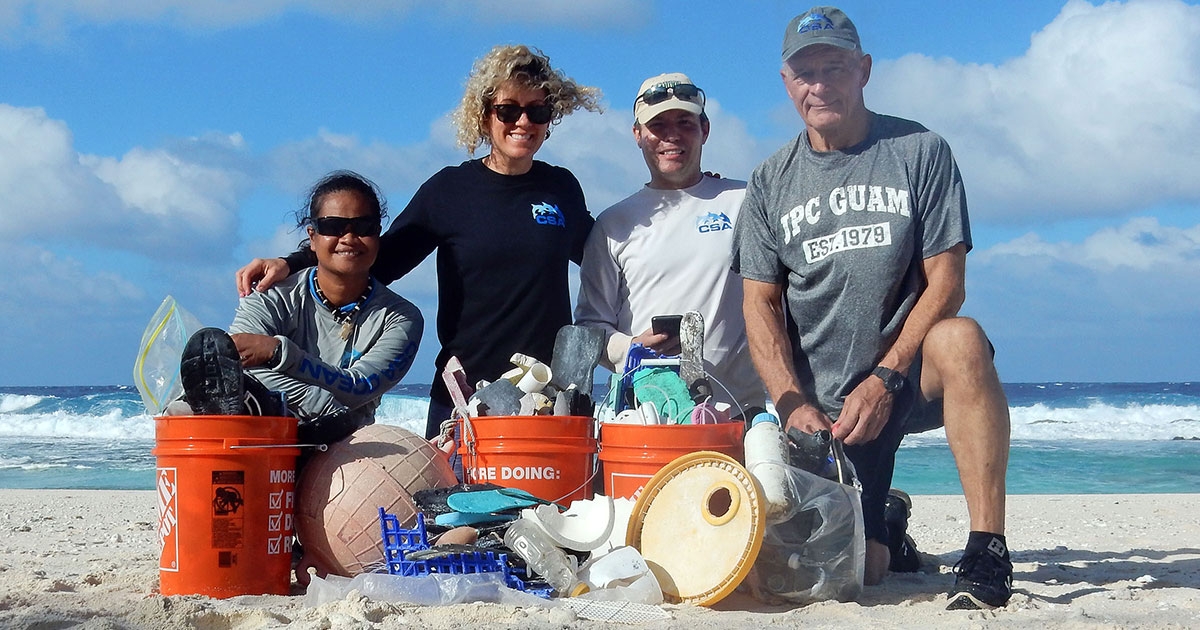 In January 2020, a team of marine biologists from CSA Ocean Sciences Inc. (CSA) and Latte Marine Construction, LLC (LMC) had a unique opportunity to clean up a local beach on the island of Rota in the Commonwealth of the Northern Marianas Islands (CNMI).

The team was on the island performing a coral relocation survey when a short stint of rough weather suspended diving operations for several days. Upon their first visit to Mochong Beach one afternoon, they noticed a heavy amount of marine debris and trash. Erin Hodel, a Senior Scientist at CSA, started collecting trash in a grocery bag, which she quickly filled. The team decided to make good use of their time the following day and returned to the beach with 5-gallon buckets and bags.

The team spread out in different directions walking the beach. Some team members focused on large debris such as fishing buoys, nets, bottles, and flip-flops while others focused on removing small, weathered pieces of plastic from the wrack line. Unfortunately, it was easy to fill a bucket; over 100 lb of marine debris (all various forms of plastic) were removed from the beach and disposed of properly. Keith Spring, CSA’s lead scientist for the survey stated that, “Nearly all of the material came from elsewhere and it was personally gratifying to collect the material and remove it from the beach system, but until humankind changes its behavior relative to recycling, over-consumption, and littering, it feels like a losing battle.”

Typhoon Hagibis made landfall in the CMNI with sustained winds of 120 mph in October 2019; therefore, much of the debris on the beach may have resulted from the typhoon. Additionally, the CNMI are located near boundary currents of the North Pacific Gyre, which bring marine debris from the Great Pacific Garbage Patch.

Closer to home, CSA regularly participates in organized beach clean-ups in Martin and Palm Beach Counties, Florida. To see more about other efforts by CSA Ocean Sciences helping combat the marine debris issue, visit our other blogs, “All In A Day’s Work: Marine Trash Collection” and “CSA Ocean Sciences, OSI and TSC Team Up For Beach Clean Up.”