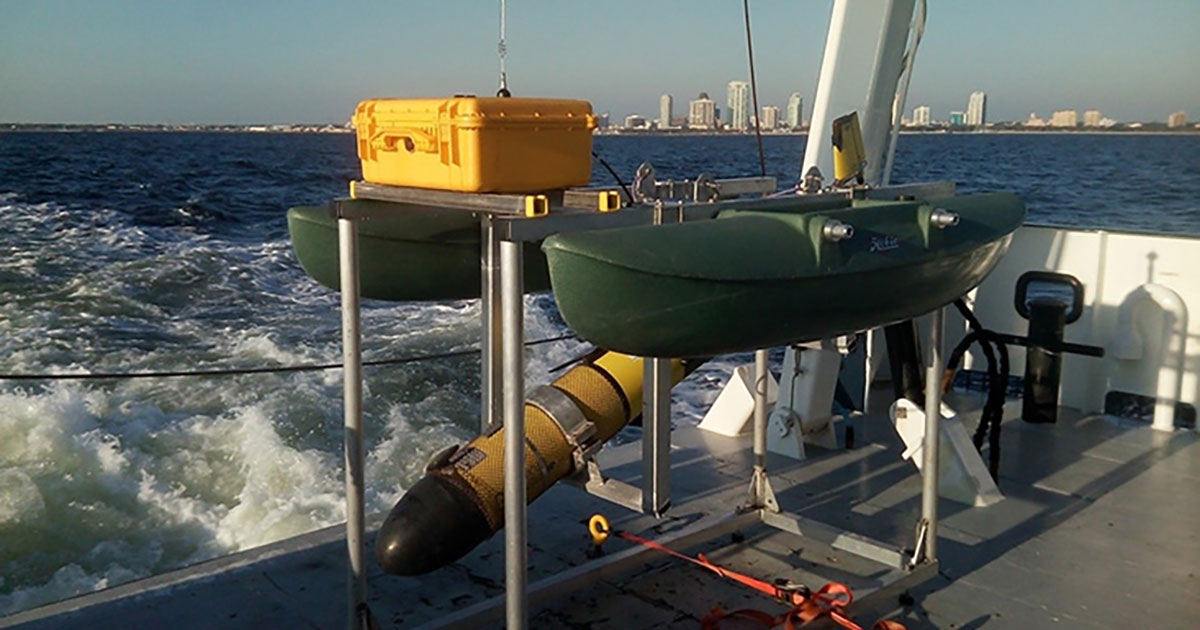 Mr. Eddie Hughes is a project scientist who has been with CSA Ocean Sciences Inc. (CSA) for 15 years. He is one of CSA’s research divers and has been involved in a wide variety of nearshore and offshore domestic and international projects. Over the last several years, Mr. Hughes began to specialize in projects utilizing active acoustics, which involves using human-created sound to measure and visualize the environment. This differs from passive acoustics, which is essentially listening to sounds to understand the nature of their sources.

Following the Deepwater Horizon oil spill in 2010, Mr. Hughes had the opportunity to provide support on several offshore surveys led by Dr. Tracey Sutton (currently a Professor at the Department of Marine and Environmental Sciences, NOVA Southeastern University) using midwater trawls to capture and characterize mesopelagic fish communities in depths between 800-1,200 m in the Gulf of Mexico. Dr. Kevin Boswell (a post-doctoral student at the time and now Assistant Professor of Fisheries Acoustics at Florida International University [FIU]) oversaw the collection of water column acoustics, which provided acoustically derived views of the scattering layers of fish and zooplankton at these great depths. Mr. Hughes was so intrigued by this technology and its applications and, coupled with the fact that CSA has much of the same acoustic technology (SIMRAD EK80 scientific echosounders), he decided to enroll in a Ph.D. program at the University of South Florida (USF) College of Marine Science in St. Petersburg, Florida.

At USF, Mr. Hughes focuses on active acoustics under the direction of Dr. David Naar (Professor and Associate Dean). As part of his research efforts, he has been engaged in projects that utilize water column acoustics for both CSA and several USF research programs, including USF's Continental Shelf Characterization, Assessment and Mapping Project (C-SCAMP). C-SCAMP, a large scale mapping and reef fish habitat characterization effort led by Dr. Steve Murawski, Professor at USF’s College of Marine Science, and, more recently, an innovative autonomous glider-based research program led by Mr. Chad Lembke, chief engineer of USF’s Center for Ocean Technology. This has given Mr. Hughes the opportunity to collaborate broadly with project team members, including Dr. Boswell, Dr. Chris Taylor of the National Centers for Coastal Ocean Science (NCCOS), and Dr. John Horne, Professor and Director of the Joint Institute for the Study of the Atmosphere and the Ocean (JISAO) at the University of Washington. Mr. Hughes served as co-chief scientist on Mr. Lembke's team, which has made significant progress utilizing a miniaturized SIMRAD echosounder on a new Slocum glider system to estimate fish biomass in the water column. A blog post from USF gives an engaging overview of the testing and calibration of that echosounder in Tampa Bay. Mr. Hughes expects to complete his Ph.D. next year, after which he will continue his work in the field of fisheries and active acoustics at CSA and maintain his collaborations to support the next wave of fisheries acousticians coming through USF.