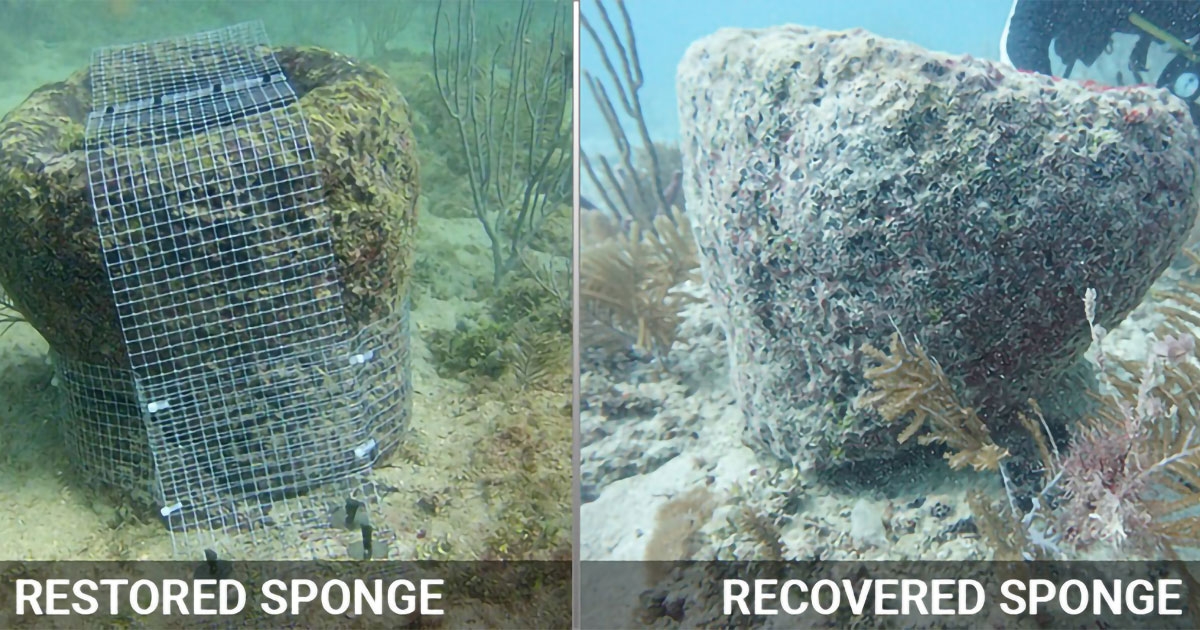 Sponge reattachment began gaining attention from biologists and regulators when published data in the 2000s indicated that sponges could be quite long-lived and along with hard corals, were the oldest components of some reef communities. These large sponges, such as the barrel sponge (Xestospongia muta) and the loggerhead sponge (Spheciospongia vesparium), are primary biological and structural components of reef habitats along the South Florida coast. Notably, both of these sponges can grow to be massive, with dimensions well over a meter, providing considerable vertical relief and microhabitat for the reef community. While restoration of the barrel sponge has drawn the lion’s share of attention with published studies regarding methods for reattachment, the successful reattachment of a loggerhead sponge is unprecedented (to our knowledge).

There are multiple methods for reattaching sponges—of primary concern in the reattachment process is maintaining the stability of the sponge for an adequate period of time to allow tissue growth and bonding with contact surfaces.

During a telecommunication cable lay survey offshore southeast Florida, Mr. Graham discovered a massive loggerhead sponge that had been cut at its base and was subsequently rolling about on the reef. To prevent collateral damage to the reef biota and the potential loss of the large displaced portion of the loggerhead sponge, he created a novel approach while in the field to secure the decapitated portion (head) of the sponge to its original base.

The large head of the sponge was transported and situated on top of the base in a relatively balanced manner. Stiff, galvanized wire mesh strips approximately 12-inches wide were used to 1) provide vertical pressure to ensure the direct contact and maximum coverage between the head and the base and 2) laterally stabilize the restructured sponge from sheer stress. To provide vertical pressure, wire mesh was placed over the top of the restructured sponge, pushed tight to conform to the side profiles of the sponge, and secured to the adjacent hard substrate with masonry nails. To provide sheer strength, wire mesh was pulled very tight around the restructured sponge and secured with plastic cable ties.

This mechanical reattachment technique provides another means for mitigating impacts from anthropogenic activities and could very well be applied to any massive sponge that has been displaced or is being considered for relocation.