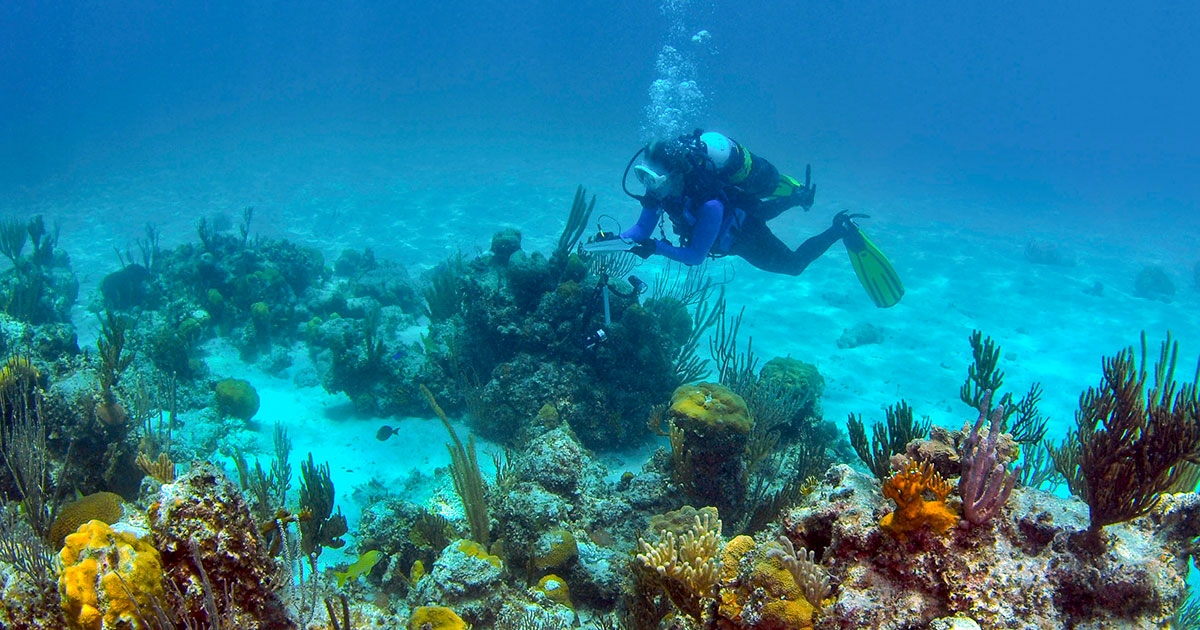 The National Oceanic and Atmospheric Agency (NOAA)’s Climate Prediction Center is, once again, in fact for the seventh consecutive year, forecasting “above-average” storm activity for this year’s Atlantic hurricane season (June 1 – November 30). Experts predict that the climatic conditions over the next 6 months will generate a total of 14 to 21 named storms (winds of >39 mph), of which 6 to 10 could become hurricanes (74 – 110 mph) and 3 to 6 major hurricanes (>111 mph winds).

No doubt disheartening news for residents up and down the eastern seaboard and in and around the Gulf of Mexico, but what about the communities that dwell below the waterline?

Hurricanes can wreak havoc on marine ecosystems above and below the surface, especially in shallow nearshore areas. Of the several hydrographic and topographic impacts caused by this cyclonic churn, one area of concern is the potential damage that these extreme weather events can have on Florida’s already embattled coral reef communities.

In late 2020, NOAA and the University of Maryland Center for Environmental Science co-published a report that surmised that the overall health of US coral reefs was “vulnerable” and in decline. Worst still, the long-term outlook was considered “dire” due to the steady rise in ocean warming, acidification, and impacts from human activities, as well as the rapid spread of coral diseases such as stony coral tissue loss disease (SCTLD). SCTLD was first identified in Florida in 2014 and is now rife in The Bahamas and wider Caribbean. Throw towering waves, relentless surface swell, and powerful sea surges into the mix and you surely have the “perfect storm” for coral welfare.

While the physical disturbances imparted on coral reefs by tropical weather patterns might at first seem all-destructive, they also have the potential to help coral reef communities and the habitats they provide.

Storm-fueled underwater forces can easily snap coral heads or cause shifting sands to scour or completely engulf coral colonies. Certain species, such as elkhorn and staghorn, which have antler-like branches, are particularly susceptible. However, in many cases coral damage of this sort encourages coral reproduction, as is the case for elkhorn and staghorn coral, whose reproductive strategies include fragmentation. In this process, under the right conditions, broken pieces of coral are able to relocate and reattach themselves to the seafloor in a new and often more favorable location; thus, the growing frequency and intensity of storms is likely to have a direct influence on this.

Atlantic hurricane season tends to ramp up towards the end of summer; August and September are generally considered to be the most turbulent months when climatic conditions favor the most severe storm activity. This coincides with another natural coral reproductive strategy, broadcast spawning, when colonies release gametes (eggs and sperm) simultaneously to mix in the water column. From there, fertilized baby corals (larvae) will drift on the ocean surface propelled by currents before eventually settling back on a reef, where they will grow and flourish. Therefore, the consensus is that storm-energized sea states may extend the larval range.

Hurricanes also help to alleviate the thermal stress that corals typically experience during the hotter summer months. The extent of this evaporative cooling effect—as hurricanes absorb energy from surface waters through the transfer of latent heat—is directly related to the magnitude of the storm system. In short, the stronger the storm, the greater the cooling effect. At the same time, surface upwelling brings cooler waters from the deep up to the surface. Compounding this cooling process is the storm’s geographical coverage; the extended cloud coverage of larger storms further reduces the impact of solar heat and sunlight stressors.

So, in any given year, the Atlantic hurricane season represents a prolonged period of threats and opportunities for coral reefs. Therefore, the ongoing study of how coral communities react to these temporal variables is fundamental to preparing mitigation and intervention strategies.

CSA scientists have been designing and conducting biological monitoring programs to assess the impacts of shifts in coastal variables, including the impacts of hurricanes on reef habitats, for over 52 years.

Working with local coastal authorities, these programs usually include an initial baseline characterization survey of sensitive marine resources. The monitoring may include the collection of video and photographic data of the biological communities, the establishment of repetitive sampling stations or transects, and in situ health assessments of various species. Surveys conducted before, during, and after extreme weather events or other activities help to identify any detrimental impacts to the local marine ecosystem.

Monitoring sensitive marine resources, such as coral reefs, is a large part of what CSA’s highly experienced scientific diving team do in the field—not just in Florida but all over the world. In addition to our broad experience in conducting surveys for coral disease, the spread of which is significantly perpetuated by climate change, we have leading subject matter experts on staff trained in specific coral identification and monitoring, including Endangered Species Act (ESA)-listed species.

CSA divers, all of whom are certified in scuba and trained as specialty divers for utilizing enriched air (Nitrox), regularly collect photographic and other in situ data as part of various long-term coral monitoring programs, stemming from coral relocation and mitigation projects.

In shallow waters (less than 30 m), CSA conducts repetitive video transects or takes still photos to record and analyze the relative abundance and health of benthic organisms, including corals. In deeper waters, CSA deploys its own extensive inventory of scientific sampling instrumentation, which includes acoustic data collection systems and an expanding portfolio of marine autonomous vehicles and advanced hydrographic, geophysical, and geotechnical instrumentation capable of operating from inland, nearshore coastal waters out to full ocean depths.

Find out more about our scientific diving capabilities and our biological sampling work or any of CSA’s other marine survey services.