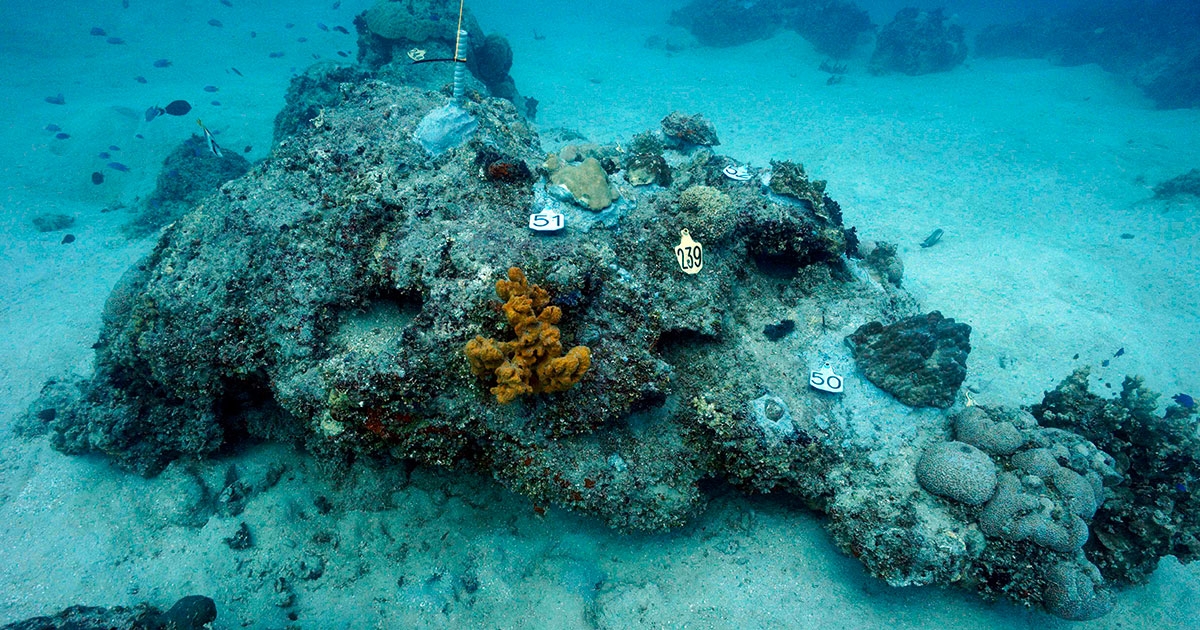 CSA Ocean Sciences Inc. (CSA) scientists completed a coral relocation project for the Port Authority of Guam immediately before the COVID-19 pandemic brought most of the world to a screeching halt. The project was required prior to significant repairs to Hotel Wharf in Apra Harbor, which had been scheduled for early April.

Three weeks before the Hotel Wharf project start date, a different CSA reef assessment survey in Guam was postponed by the client, immediately following our survey team and equipment mobilization to Guam and less than 24 hours before the scheduled start of work. Upon learning of this work stoppage, the CSA field team approached the Port Authority to inform them that we had a capable scientific diving team on the ground ready to mobilize for their project if approval could be granted. As the COVID-19 situation was on the horizon but had not yet impacted Guam, we felt this could be a chance to prevent what could be an indeterminate delay to their schedule. Concurrent with their review and approval of our plans, we mobilized additional equipment and supplies, coordinated with our dive support subcontractor, and then initiated the project.

The repairs to Hotel Wharf, which is located along the northern side of Apra Harbor, include the construction of a new sheet pile retaining wall outside of the existing bulkhead that would cover existing corals and other marine biota colonizing the structure. As part of the mitigation for the project, CSA was retained by WSP USA Inc. to conduct an initial assessment of the wharf face and seafloor adjacent to the wharf, confirm potential reattachment sites for corals to be removed from the wharf face and adjacent seafloor, and to then detach all healthy coral colonies from the project direct impacts area and transport and reattach them at the identified recipient sites.

The CSA team included experienced marine scientists Keith Spring, David Snyder, Jeffery Landgraf, and Chip Baumberger, along with Victor Bonito, a coral expert and director of Reef Explorer, Fiji. The team completed the initial wharf assessment and identified several slightly degraded reef areas to the west of the wharf large enough to contain the relocated coral colonies. Nearly 600 relatively healthy stony corals ranging in size from 10 cm up to 75 cm in diameter comprising at least 30 species, along with a few elephant ear sponges and sea whips, were then carefully removed from the wharf face and from adjacent man-made debris at the base of the wharf. They were placed in plastic crates and transported to the reattachment areas over a 3-day period. Water depths at the reattachment areas ranged from approximately 2 m near the reef crest down to 12 m at the base of the reef slope, similar to the coral collection depths on the wharf.

CSA staff then carefully reattached the corals to areas of exposed reef substrate using a cement and sand mixture, avoiding damage to adjacent coral colonies. Following the completion of the coral reattachment, CSA scientists tagged and mapped more than 200 of the corals for subsequent survival monitoring and completed a baseline health assessment survey. As part of the permit conditions for the mitigation effort, CSA staff will return to conduct additional agency-mandated coral health and survival monitoring at 6 months, 18 months, and 36 months post-relocation.

Due to the rapid coordination and cooperation between Port Authority staff, WSP USA Inc., and the CSA field team, we were able to transform what could have been a major delay to the Port’s refurbishment schedule into a successfully completed coral relocation project. This will allow a resumption of the Hotel Wharf refurbishment project by the Port Authority of Guam as soon as conditions warrant a return to work. Following completion of the project, all CSA staff returned home and safely completed a 14-day home quarantine with no adverse effects.