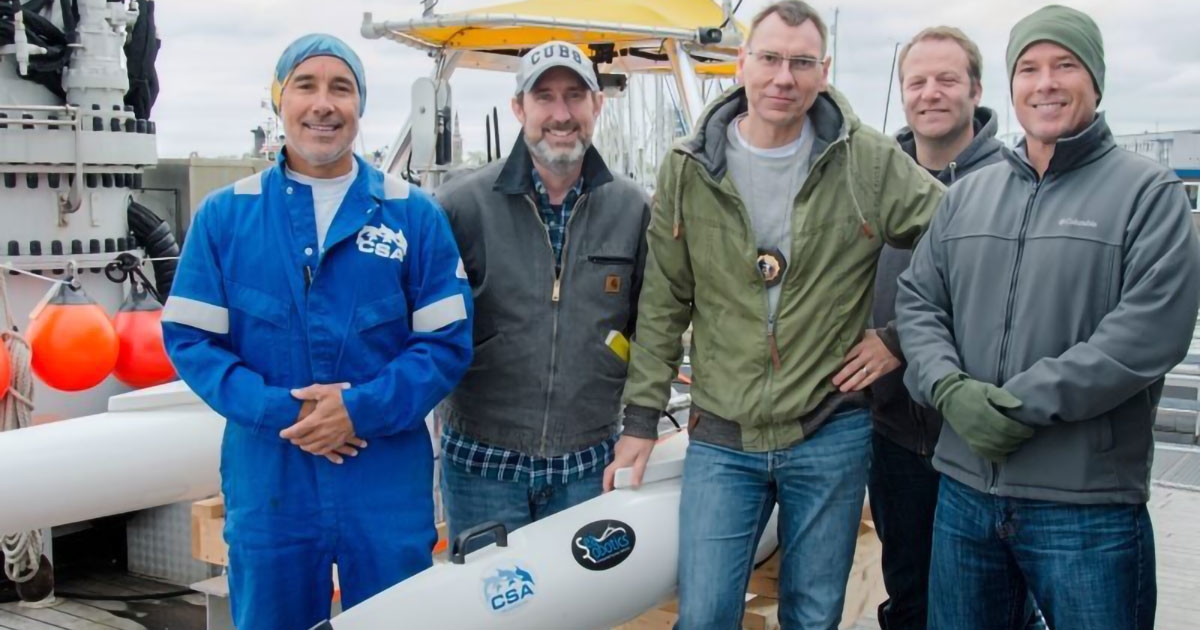 CSA with Researchers Search for B-17 in the Netherlands

The search has begun: A US researcher is on the way to the Dollart, the mouth of the Ems near Leer/Emden and the Netherlands, to search for traces of the crashed World War II B-17 bomber "Miss Deal." The Americans use state-of-the-art technology to illuminate the Watt.

Will the mystery surrounding the remaining two crew members in the B-17 bomber be resolved after seven decades? With the current mission in the Dollart, the chances of bringing light into the darkness of history have at least increased.

A four-headed "Defense POW / MIA Accounting Agency" (DPAA), a sub-agency of the US Department of Defense, has come to Europe to look for remains of the bomber in Dollart. The DPAA receives support from the Dutch Navy. It has provided the unique "Hydra" ship with a crew for the search, which is primarily used for diving operations. The vessel is 28.80 meters by 8.70 meters in size and has a boom crane. With this crane, an unmanned search robot is placed in the water, which absorbs the watt layer with high-sensitivity devices. The wreck between Maanplaat and Heringsplaat is presumed. The search is concentrated in this area.

Still in operation until 19 May

The mission lasts until 19 May. During this time, the team will collect a variety of data, which may take several months to evaluate. If there are promising indications for the wreck, the authorities have to decide how and if a salvage can take place.

Guided by the operation of Lieutenant Commander Chris Gustafson. "This is a very important mission for our agency," he stressed in discussion with our editorial team. The DPAA is looking for missing US soldiers around the world to provide their relatives with certainty about their fate. She wants to clarify the whereabouts of the missing and - if possible - the mortal remains. In the case of the "Miss Deal, four" you are only at the beginning. On June 25, 1943, the "Flying Fortress" came to Hamburg after a failed assault on Hamburg under violent bombardment by German hunters and flaps. She crashed in the Dollart. Six crewmembers were able to save themselves and four were killed. The bodies of the gunman Charlie E. Crawford and the pilot John R. Way were never found. They are suspected in the wreck.

It is the search for a needle in the mud: A swimming robot with high-sensitivity devices is listening and looks into the Dollart to get some clues about the crashed bomber. The search requires above all: patience. The US DPPA team has come to Holland with high technology to carry out the mission in the Dollart: CSA Ocean Sciences from Florida has provided a USV (Underwater Survey Vessel) for this purpose. This floating robot is controlled by CSA employee Frank Johnson from the ship of the "Hydra" special vessel.

The vehicle travels in the Dollart in a GPS-controlled search area and collects data in two ways: on the one hand, a device sends low-frequency signals into the water. If these impulses hit a resistance on the ground, they are thrown back as an echo. In this way, team member Jeff Enright explains, one can get hints of abnormalities - that is, deviations that can point to relics in the Dollartboden.

At the same time, a magnetometer is used, which can search specifically for iron-containing relicts in the ground. This can also indirectly indicate the missing "Miss Deal". "Iron was, for example, in the seats, machine guns, or bomb shafts of this machine," Enright explains. The search area is located in the area Maanplaat / Heringsplaat and covers two areas of 1.5 times one kilometer as well as 1.5 times 0.5 kilometer size. "The area is a challenge, especially through the thick layer of tidal flats and tides," says Enright. The devices can measure up to twelve meters deep in the silt. Anyone who expects a plastic image of the Dollard base in these measurements will be disappointed: On the monitors, only lines and black-and-white spots are visible. For the researchers, however, they are like a window to the seabed.

The reconciliation of both data sets is an elaborate process: "This can take 40 to 60 days," estimated mission leader Chris Gustafson. This weekend, he wants to start the first analysis, he says. Particularly interesting for the team are matches for the acoustic and magnetic data sets. They can give a clear indication of where something can be found. A rescue measure is not planned, however. "We collect only data first. If this results in something concrete, it is decided later on how to proceed, "explains Gustafson. This is not just about the "Miss Deal", but also about another bomber, which is still suspected in Dollart.

This is a great group, "the lieutenant commander praises the performance of the team. He is grateful for the support of the Dutch navy and environmental organizations, "because we operate in a very sensitive area," he knows the importance of the doll.

He is especially grateful to the Enrico-R in Bremen. Schwartz from the MAACRT team (Missing Allied Air Crew Research), who is looking for missing soldiers on behalf of relatives. The volunteer investigator, as reported, was also on the road in the Rheiderland and has searched for news that has witnessed the fall of the "Miss Deal". Schwartz has now prepared the events on board the "Miss Deal" of 25 June 1943 in detail and made his results available to the DPAA. The last piece of the puzzle would be the discovery of the wreck as well as the still missing corpses of the pilot John R. Way and the shooter Charlie E. Crawford.

Tony Crawford from Dallas, the nephew of the killed Charlie Crawford, is looking anxiously towards Dollard these days and hopes for the big breakthrough in search - a search that he already launched in 1999.