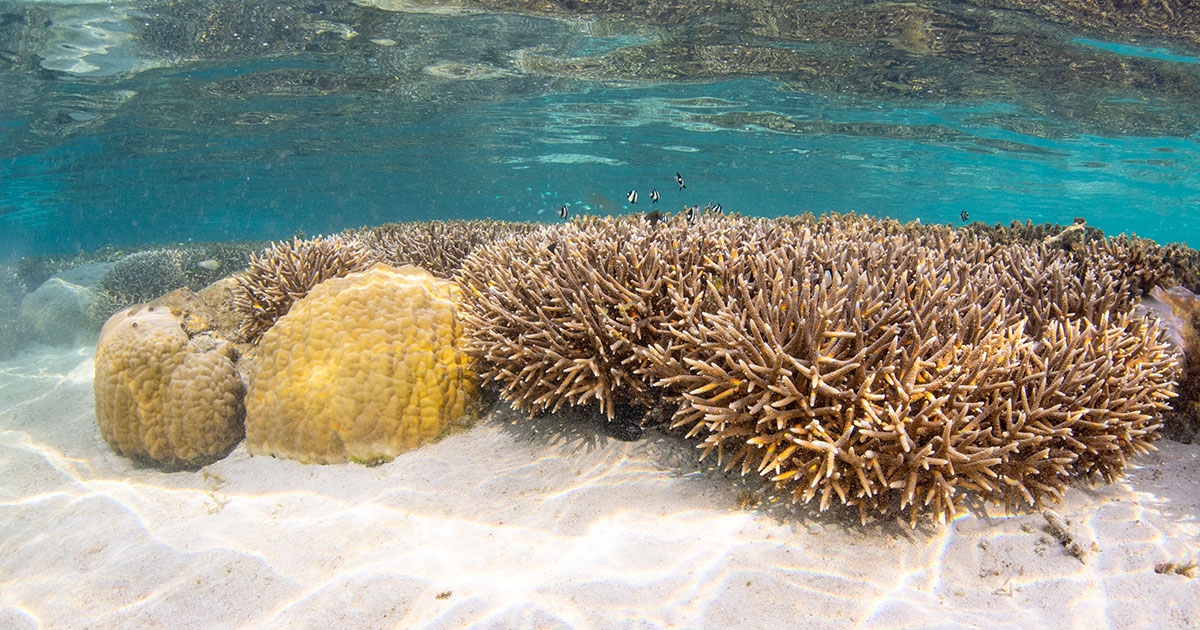 Farmers on the Reef

Farming was a major step in the development of human societies, helping to free us from the uncertainty of living off the land. But, not surprisingly, other animals were “farming” long before humans were even hunting and gathering on the open plains of Africa.

In tropical seas, a group of reef-dwelling damselfishes (Pomacentridae) actively cultivate their favorite seaweeds (filamentous algae), often using branching corals of the genus Acropora as the arable substratum. These undersea farmers maintain algae cultures within small, actively defended territories over segments of coral thickets, which provide a three-dimensional shelter for the farmers.

The undisputed commissioner of agriculture in Guam’s Tumon Bay is the blunt snout gregory (Stegastes punctatus). This damselfish, also known as the farmer fish, will selectively nip unwanted algae from mats that form on damaged segments of Acropora coral branches until relatively pure stands of fine, palatable, filamentous algae remain. This industrious weeding also attracts micro-crustaceans, organic debris, and other material that may be used by the fish.

I recently snorkeled over shallow stands of Acropora corals in Tumon Bay and noticed some robust and healthy colonies (Photo 1), but in many stands, the branches were covered by filamentous algae, indicating territories of blunt snout gregorys (Photo 2). The activities of these agrarian damselfishes can profoundly influence the distribution and abundance of biota as well as nutrient processing and other aspects of local ecology on the affected reefs. 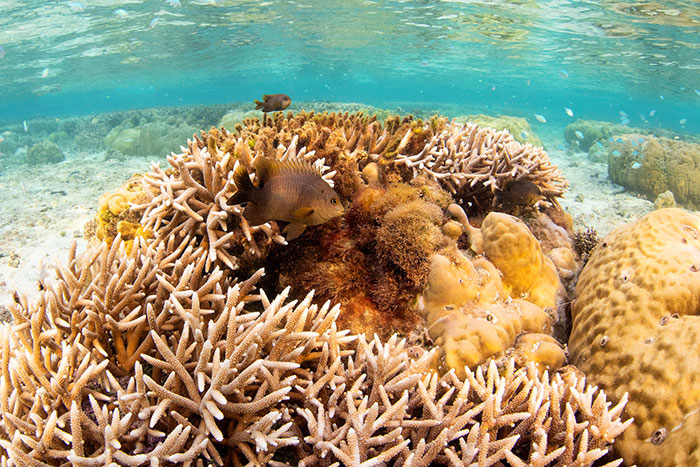 Farmer fish readily converge on areas of coral damage as an opportunity to reap the benefits of new cultivable territory. Indeed, from 2013 to 2017, Tumon Bay corals suffered a deadly combination of storms, extreme low tides, and El Niño-driven water high temperatures. These events killed appreciable portions of Acropora colonies in the Bay, which apparently opened the door for the blunt snout gregorys as their numbers seemed to have increased greatly during the 10 years I have snorkeled there.

Controlling pests and discouraging poachers is important to any agricultural enterprise. Blunt snout gregorys tenaciously defend their fields from other fishes, actively charging at intruders and/or firing warning shots in the form of loud, staccato pops created by sharp claps of their teeth. The fishes’ wrath is directed mostly toward other plant eaters like parrotfishes (Labridae), surgeonfishes (Acanthuridae), and rabbitfishes (Siganidae), but they also accost coral-eating butterflyfishes (Chaetodontidae). This latter activity relieves predation and allows small coral colonies within defended territories to flourish. Interestingly, larger carnivores such as jacks (Carangidae), groupers (Epinephelidae), and emperors (Lethrinidae) generally get a pass from the pugnacious farmer fishes, but snorkelers do not (Photo 3). 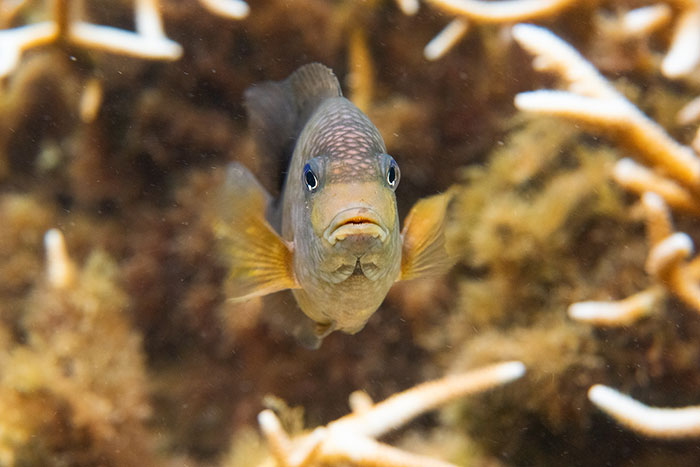 A blunt snout gregory (Stegastes punctatus) confronts an unwanted intruder in Tumon Bay, Guam.Because their conspicuous plots lie in shallow, clear waters, the blunt snout gregory and its farming relatives have been favorite study subjects of marine ecologists for decades. Some of this research has sharpened our understanding of the dynamics among algae, herbivores, and corals on reefs, but there is always more to learn about these fascinating fishes. Researchers recently discovered that farming damselfishes possess a special jaw ligament that causes the mouth to close at lightning speed. This adaptation facilitates both accurate weeding of hair-like algae and the sonic blasts caused when the jaw and teeth are rapidly clapped together. This ligament may represent a key trait leading to the radiation of the farming lifestyle in these fishes (Olivier et al., 2014).