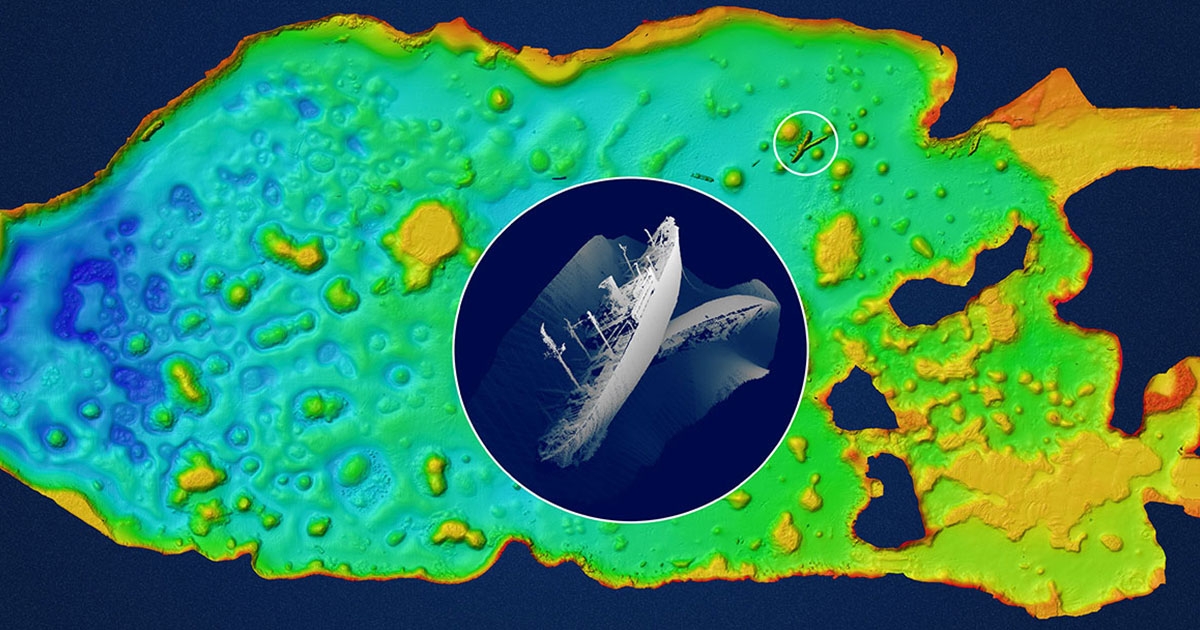 Frozen in time, shipwrecks never fail to pique the imagination. The sight of a once seaworthy vessel lying dormant on the seabed, slowly conceding to the corrosive subsea environment, always evokes a cacophony of emotion: intrigue, sorrow, awe, and sometimes sheer bewilderment.

Breakthroughs in underwater imagery have transformed our appreciation of wreck sites, advancing how much we can learn from them. A high-definition flyby of an ill-fated hull—much like the now iconic NOAA footage of R.M.S. Titanic resting in the pitch dark, freezing waters 600 kilometers off Newfoundland—not only transports viewers to notoriously inhospitable depths (nearly 12,500 ft in this case), but also provides naval archeologists and oceanographers alike with the forensic clues needed to unravel the mysteries that shroud the remains.

Traditionally, most high-profile shipwreck discoveries are preceded by a period of historical research, after which an expedition team mounts a series of missions to pinpoint an identified target. Such campaigns often take months—if not years—of planning, as well as considerable financial investment and careful stakeholder management (especially when operating in international waters). They also take persistence—efforts to recover the Titanic lasted decades before Robert Ballard and Jean-Louis Michel first set eyes on the fabled “unsinkable” liner in 1985.

But perhaps more than anything, expeditions to locate sunken assets are contingent on the deployment of cutting-edge technology. 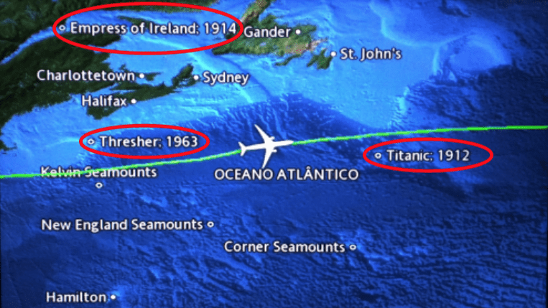 Today, on a commercial flight over a significant body of water you might notice some unexpected annotations on your in-flight map. These are not notable landmarks; they are wreck sites. Nor do they represent the detective work of the aircraft’s radar system, but rather, in one way or another, the achievements of sonar.

Subsea exploration has progressed hand in hand with the engineering feats of sonar technology. The relatively routine use of sonar dates back to World War I and a submarine detection device known as ASDIC (Anti-Submarine Detection Investigation Committee), but it was the later development of multibeam echosounders—initially by the U.S. Navy in the 1960s and then private companies—that marked a pivotal milestone for ocean marine survey.

Like other sonar systems, multibeam systems emit multiple and continuous acoustic waves in a fan-shape pattern. The length of time it takes for the sound waves to reflect off the seabed and return to the receiver is used to calculate water depth. Unlike other sonars, multibeam systems use beamforming technology to extract directional information from the returning soundwaves. This in turn produces a swath of depth readings from a single ping. 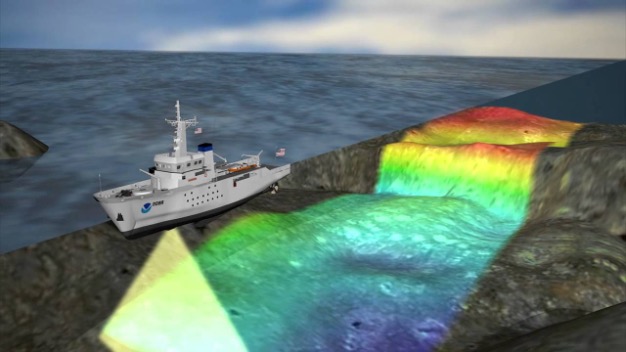 Developers continue to advance the performance of multibeam systems, and the latest, high frequency multibeam sonars can be easily incorporated into a tender vessel or a separate towed body. Increasingly, sensor manufacturers are working with Autonomous Underwater Vehicle (AUV) and Autonomous Surface Vessel (ASV) companies to facilitate a transition towards increasingly remote survey operations.

Synthetic aperture sonar (SAS) technology is a particularly sophisticated type of sonar that uses a synthetic array to capture high-resolution images, so it is of increasing interest to naval archeology. With a traditional sonar system like side scan, the transducer array sends out an acoustic pulse and waits for it to return before sending out another one. However, a SAS sends out continuous pulses without processing these returns, allowing it to artificially extend the array by combining the returned signals. A SAS beam is like a “funnel” that overlaps with itself multiple times to render a higher image definition, allowing the system to map a site at 30 times the resolution of a traditional side scan sonar.

Today, sonar is used for a whole raft of applications—from bathymetric research (measuring depth) to the planning, construction, and maintenance of offshore assets—and while in recent years the cost of technology acquisition has fallen thanks to lower cost of components, the deployment for underwater search and recovery missions still hinges on a defining a relatively tight search area.

In short, whether programming an AUV to “mow the lawn” of a particular survey site or launching an ROV/submersible to gather intel, the technology is readily available. The challenge, however, is where to deploy it. And even with the help of other technologies to frame the intended exploration site, we may be talking about an immense expanse of seabed. As was the case, famously, with the multi-year effort to locate missing Malaysian Airlines Flight 370 in the south Indian ocean. Despite a highly orchestrated international campaign—which included the deployment of the latest side-scan sonar, multi-beam echo sounder, bottom profiler, high-definition camera, environmental sensors, magnetometer and SAS technology—the plane is yet to be found, and the search continues.

Episodes like this are a reminder of how vast the ocean is, and how much remains to be explored. Experts suggest that so far, at best, we have mapped approximately 15% of the planet’s seabed. So, for the most part, we cannot knowingly account for what lies beneath. But rest assured, there are shipwrecks aplenty—as many as 3 million, according to the latest UNESCO estimations. There may be more. And this figure does not account for all the other likely wrecks strewn about the seafloor, like downed aircraft and lost submarines.

However, all of that is about to change.

There is now a global initiative in place to debunk the now rather staid assertion that we know more about the lunar surface than we do about the ocean seafloor. This unrelenting drive to map our oceans is spearheaded by an unprecedented collaborative project known as The Nippon Foundation-GEBCO Seabed 2030 Project, or Seabed 2030, which aims to gather and process all available bathymetric data into one place in order to produce a definitive—and publicly accessible—map of the world’s seafloor and ocean by the end of the decade.

Mapping the seabed with the latest sonar equipment will, no doubt, reveal a graveyard of vehicles lost at sea, possibly dating back millennia. Such as the discovery of the oldest intact shipwreck to date—reported by the BBC in 2018—of a Greek merchant ship that sunk off the Bulgarian coast more than 2,400 years ago. Two factors kept the wreck intact over the centuries: first, it was submerged in the anoxic waters of the Black Sea and, second, it was found at a depth beyond the reach of divers, at over 2,000 meters. The team used two ROVs to map out a 3-D image of the ship and a sample to carbon-date its age. In other words, it was technology that rendered this extraordinary window back into the ancient world of boat building and seafaring.

CHARTING HISTORY IN THE FIELD

Over CSA Ocean Science’s five decades as a multidisciplinary marine environmental consulting firm, we have worked with a broad range of clients from both the public and private sectors to harvest critical sonar multibeam imagery data. Much of our work centers around the collection of bathymetric data suitable for, and with the purpose of, developing habitat maps for the management of Endangered Species Act (ESA)-listed species, coral reefs, seagrasses and other marine resources across nearshore waters. This process often reveals some of the historic relics sitting below the waterline and the important role they sometimes play in supporting local marine life. Or, indeed, if they pose any significant environmental threat.

One such project that rendered images of historic intrigue was CSA’s work to provide accurately positioned sonar multibeam imagery data of outer Apra Harbor, Guam in order to delineate marine habitat types, with 100% backscatter coverage. The combined survey data, including imagery and bathymetry, were used to develop high-resolution benthic habitat maps for use in mapping coral cover and other benthic habitat types.

The SMS Comoran (WWI) and the Tokai Maru (WWII) rest alongside each other in outer Apra Harbor, Guam 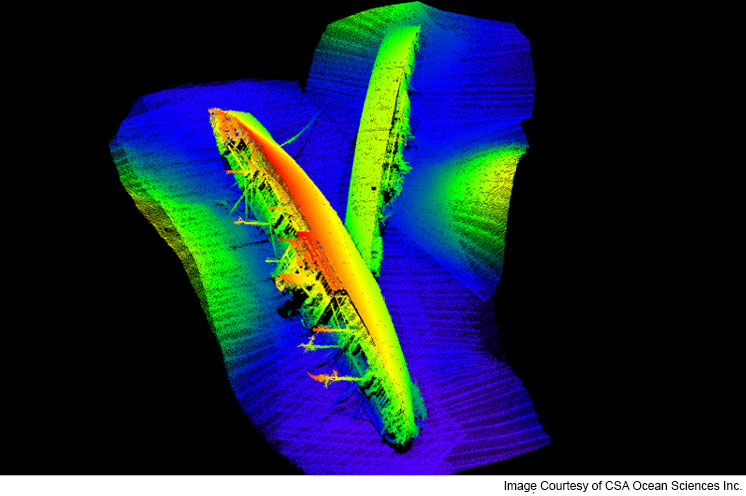 Multibeam data were collected with an R2 Sonic™ 2024 UHR Multibeam sonar and processed using Hypack/Hysweep software, revealing the wrecks of the SMS Comoran, which was scuttled during WWI, in 1917, and the Tokai Maru, a WWII Japanese freighter which was destroyed by the USS Snapper, in 1943. Although they sunk 25 years apart, the two vessels came to rest in touch with each other on the port’s floor. This is the only place in the world where a World War I and a World War II wreck sit touching each other underwater, and they can both be dived on one tank.

Unquestionably, when it comes to hydrographic survey, multibeam sonar has proven instrumental in recent years; but it is about to prove indispensable to the advancement of ocean science over the coming decade.

Fnd out more about CSA's hydrographic and geophysical survey operations.