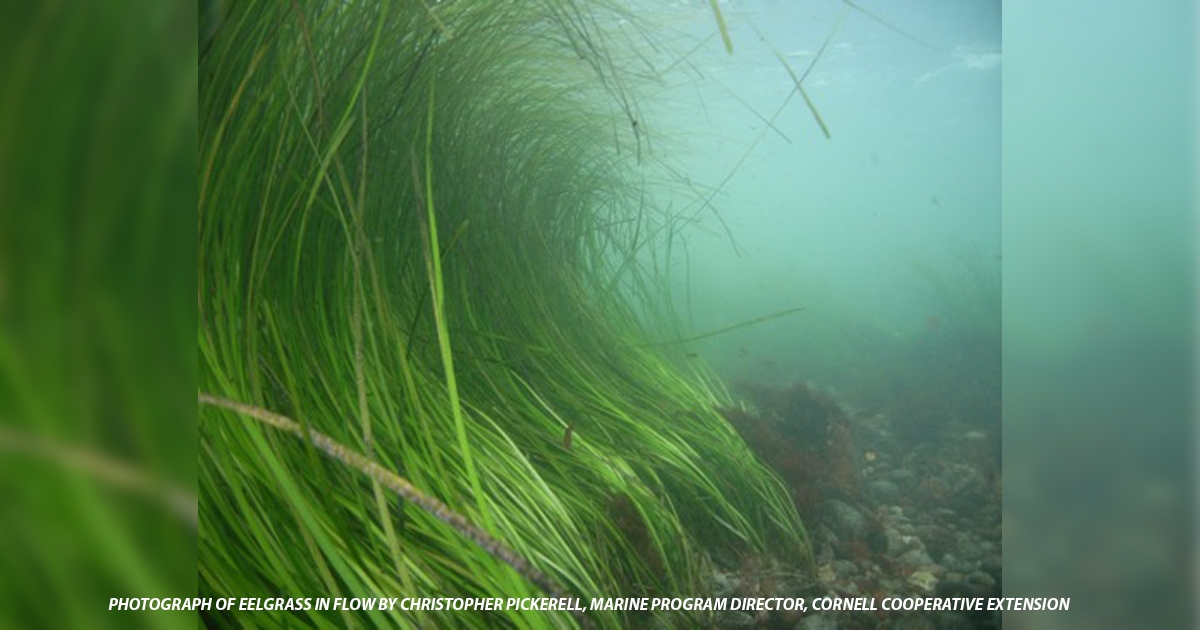 In this work, the authors asked whether the density of seagrass shoots might be a direct mechanical response to the current speed. To address this question, they conducted a controlled flow study in a seawater flume, exposing a wide range of seagrass (eelgrass, Zostera marina) densities to slow, medium, and fast current speeds.  Live plants were used and tested for their biomechanical consistency (flexural stiffness), the amount of drag force felt by individual plants, and the influence of current speed reduction and turbulence of the passing water. The plants were arranged in the flow tank as a small meadow for testing.

Since changing shoot density did not affect drag on the plants or the flow in a grass bed exposed to a given ambient current, they concluded that seagrass shoot density (at least for this global species) was not a direct, adaptive mechanical response to flow speed. Instead, other factors associated with current speed reduction in canopies such as particle trapping that changes the sediment chemistry or light availability arising from the plants bending over and shading each other are likely the primary, if indirect mechanisms, driving differences in seagrass shoot density.

Their findings were consistent with their earlier work and biomechanical studies of flexible organisms in general. When a flexible organism attached to the substratum is bent over in the flow, it has less surface area facing into the flow and so experiences less drag – and has less chance of being ripped out. Most seagrasses, with their highly flexible structure, use this strategy, especially when arranged in large groups such as meadows, to deal with waves and currents and not be dislodged. Thus, flexibility and bending are a strategy employed by seagrasses that eliminate the need for them to change their density; even a small number of shoots, bending over and intermeshing form a low-drag structure that deflects flow and creates a stable habitat.

This work also supports a growing body of evidence, much of which has been contributed by these authors, regarding fluid dynamics, that seagrass beds provide many ecological services irrespective of shoot density. Shoot density has been found to be a weak indicator of the larger suite of ecological services provided by seagrasses and their ability to generate a similarly sheltered environment within the canopy across a range of shoot densities bears out these observations.

This paper is an open-access publication; it and the other papers in this special issue can be found at: https://www.frontiersin.org/research-topics/5961/canopies-in-aquatic-ecosystems-integrating-form-function-and-biophysical-processes#articles